Over 11 years ago I sat down to write a book. A story for children of alcoholics. I wrote it in one night and immediately shoved it in a drawer. I knew if I did anything with it… well, it would be out there. The secret. Most important, I didn’t want to hurt my mom.

Growing up in an alcoholic home made me fiercely protective of my mother. Sure, it was okay for me to rage, blame, judge and shame her, but God forbid anyone else did. So, how can I possibly write a book that would reveal to the world that she drank?

And then one night I pulled the story out of the drawer and gave it to my then husband to read. He simply said,

This can’t live in a drawer.

I knew he was right. I knew if this story could help one person feel understood it was worth it. I knew if I had read it when I was a child it might have helped me. I knew it was time to tell the secret.

I gave it to my mother to read and asked for her blessing. This is the beauty of my mother—the side of my mother that made me always admire her by day and then feel devastated at night—she is the most giving, unconditionally loving woman I have ever known. As painful as it was for her to read my words she knew that there was a bigger picture here—a chance to help others. Putting her own feelings aside she gave me her blessing.

I started by giving this book to friends I knew who were suffering. I built a work table in my backyard and taught myself bookbinding and made each book by hand. Sewing pages, binding each one in beautiful fabric, hand drawing my cover.

Each book was an original. I still have the very first one I ever made. Over the years it has been a bit bruised, a bit worn down, even has a wonderful crayon stain from my daughter. And, yet, it still holds the story and anyone who picks it up can read it.

When making them by hand became more challenging and expensive I started to do what made more sense at the time—go to Kinko’s. This way I could donate more, give more away, hand them out at readings. They may not have been as pretty on the outside but it was about what was on the inside. Kind of like life, I guess.

I went into juvenile halls across Los Angeles and read my story to the “kids” being held for drugs, robbery, rape, attempted murder. Every single one of them had come from an alcoholic and/or drug addicted home. Each one of them had a story to tell.

Fast-forward to last week and my decision to post my book on my Studio City Mom column. I had done it the year before and the emails and comments I received from people sharing their own experiences were so moving that I felt doing this once a year might be nice.

And then… an email popped up in my mailbox.

From the producers of the Dr. Drew show…

Well, I nearly deleted it thinking it was a joke or spam—thank goodness I didn’t. My little story made its way to their producers and they wanted me as a guest on Dr. Drew’s show. I was in utter disbelief.

Dr. Drew has long been a hero of mine. The commitment he has made to helping addicts and alcoholics, the passion he has to help families heal from this disease, the wisdom he has shared on a subject that many don’t truly want to talk about is such a gift.

Dr. Drew has done more to bring this disease out of the dark and into the light than anyone I know and now I was being asked to sit with him.

A dream. I knew if I had the courage to do this, to overcome my fears of being on television, I could do something really good for all those children, young and old, who’s lives have been severely affected by alcoholism.

Alone I can only reach so many… with Dr. Drew I can reach people in places all around the world. My hope has always been that one day this book become available in schools, hospitals, institutions, recovery houses, therapists offices, even police stations. Children who are taken out of their home in the middle of the night due to parents being involved with drugs or alcohol… if they could be handed a book that might help…

Yes. Yes, yes, a thousand times yes. Thank you, producers of the Dr. Drew show, for finding me. Thank you.

Once again I called my mom. Once again, she gave me her blessing.

I was incredibly nervous before going on the show. After all, I’m a writer because I want to be behind the camera not in front of it. But, the extremely talented producers of the show and Dr. Drew himself were so kind, so inviting, so generous that once I sat on that stool next to Drew I forgot about the nerves and just focused on having an honest conversation.

I did it. And it felt great. The response I have received from friends, family and strangers has been so overwhelming. I’m humbled, truly, by the outpouring of support and love. My book is now available on Amazon and after one day it shot up to number 1 in the recovery section.

So, that’s my Dr. Drew story. Except for one last and most important part…

After I left the CNN building I drove straight home. There was only person I wanted to see. My beautiful daughter.

We got in our pajamas, sat on the couch and together we watched the show. She held my hand the entire time, she screamed with joy when she saw pictures of herself on television, she teared up at the sound of her grandmother’s voice and before going to sleep she touched my face and whispered,

I’m so proud of you, mommy.

I kissed her and told her to remember this day.

What you believe in matters, baby. Dream big and follow your passion.

And just before I turned off the light I heard,

Mommy… you were on television. 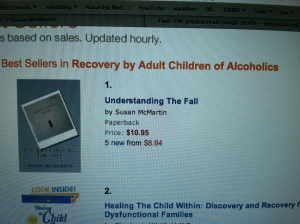 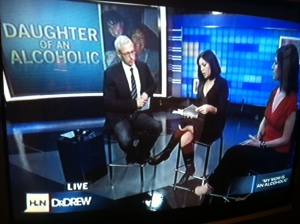