From the time my daughter was born Santa delivered presents unwrapped under the tree. That’s how she knew which were Santa’s gifts. When she was a toddler she started writing Santa her letters and leaving cookies and milk out for him. A little older, she started tracking Santa and his reindeer online seeing exactly where they were on their Christmas Eve journey through the world. And a little older she tried waiting up for Santa and one time heard his bells on our roof. When her friends no longer believed she felt sad for them and no matter what they said her belief never swayed. In her heart, in her soul, Santa’s spirit was real. And when she asked me what happens when people stop believing my response was always the same – once a child no longer believes in Santa that’s when the parent takes over.

Over the last couple of years she still left out cookies for Santa and wrote her wish list but I did notice how she looked at me when she would see her presents from Santa under the tree. About to thank me for them but stopping herself and remembering they were from Santa.

She never said she no longer believed. And I never asked.

So, this year when she didn’t write a letter or leave out cookies or discuss it at all…  in my heart I knew she had outgrown Santa. But I still didn’t ask. I suppose I was waiting for her to tell me. But she didn’t. And so it goes.

Christmas morning arrived. My daughter came out to find the unwrapped items left by Santa under the tree. And as I saw my 14 year old girl smile and look at me I felt for the first time we were both putting on an act and someone had to talk.

You know they’re from me, don’t you, baby? I said softly.

Her eyes welled with tears. She didn’t speak. I didn’t expect that so I immediately wrapped my arms around her as we sat on the floor by the tree.  She kept fighting tears. I didn’t know what to say. I told her I assumed she stopped believing because she didn’t write a letter or leave out cookies and I kept waiting for her to tell me but she didn’t so —

And that’s when she looked at me with tears down her cheeks,

I didn’t want to disappoint you. I’m your only child. I didn’t want anything to change. I just wanted to keep going.

My heart ached.  Here I had been waiting for her to tell me she had outgrown Santa when all along she was holding onto the belief… for us.

I’ve often said my daughter loves being a child. Loves it so much that she is in no rush to be an adult. So with every milestone that takes her over the bridge from childhood to young adulthood comes footsteps of grief. Grieving the end of an era, a tradition, an innocence, a magical moment of life. Santa all these years was a part of our lives. A part of our story. A connection.

It wasn’t about Santa being real or not. It was about the spirit, the magic, the belief in childhood thoughts and feelings. The delight in Christmas.

As we wiped our tears and held each other we agreed that next year we would leave out cookies, write our Santa letters and awake to unwrapped gifts from him under the tree just as we had always done. Because even though she knows and I know… it doesn’t matter. 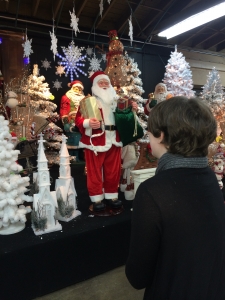