Over twelve years ago I had just dropped my daughter off at pre-school, took my dog (that for the time being I still shared with my ex husband) and went on the walk I had now made as part of my daily routine  — the only routine I had.

But that’s a longer story for another time.

On this walk with my dog as I shed a good hour of tears over having to part ways with my baby for three hours while she began pre-school, I suddenly heard a voice. A sentence. A line of dialogue that would ultimately become the first speech in my screenplay, Cook. The line was;

I had always known that one day I wanted to write a story about him. He had passed away before my daughter was born and I mourned the fact that she would never know this man — this man who was truly the most important and influential man in my life.

And, what made me even more sad… he would never know my daughter.

So, that day, that walk, as the words began to flow into my head I realized that there was indeed a way for them to meet. To hug. To connect.

Everyday I took that walk, heard characters speak to me, went home, and wrote what they said as my baby slept. When I finished the screenplay I knew that if I never wrote another story again… this one mattered. It mattered to me to honor this man.  He gave everything he had to me… I felt this was my one way to give back to him.  To let him know that while he always made sure I was seen… he was seen too. By me.

Now, eleven years later, my movie is being premiered at The Tribeca Film Festival next month. New York. The place I was born. And the title of the movie? Mr. Church.

It took ten years to make my movie. The journey of making it is a movie in itself. My daughter went from pre-school, to elementary school, to middle school. And when that first day of shooting began, she was by my side.

It’s funny, I wrote a story where they could meet. But what I realize now is that they did meet. She knows more about him than perhaps she ever would have if he were still alive. Because from the time she was a baby she has heard me talk about him, watched me write about him, seen me never give up on trying to get this movie made about him. In a strange and beautiful way…  he has lived with us her entire life and they could not be closer.

So as I sit here thinking back to that newly divorced single mom walking her dog as she cried over being apart from her baby for a mere three hours… I thank God for the voice that spoke to me. 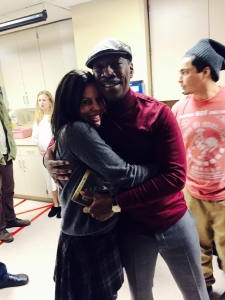 … And I thank God that I listened. xo