I heard the phrase “an instrument that isn’t used is a dead instrument.”

The man saying it was a violinist who had stopped playing for years out of anger and resentment towards his father. He finally found his hands picking it up one day, bringing the silent and neglected violin back to life. Never putting it down again.

Something about this made me think of all the instruments out there not being played. Be it a violin, a paintbrush, a voice, feet that were meant to dance. Silent. Possibly forgotten, given up on, rejected and, ultimately, dying.

I think my biggest fear, aside from anything bad happening to my daughter, is the fear of not using my instrument. Not doing the thing I am meant to do. Not spending my life playing whatever music I was born to play.

Leaving this world with my music still in me.

I look at my daughter who, from the time she was a baby, loved to paint. Draw. Color. And she still does. In fact, being an artist is what she says she wants to be when she grows up.

I want to have my art in museums, mommy.

So, in every corner of my house there are buckets of pens, colored pencils, paints, brushes, canvases, sketch pads. All being used. Living.

The only art on my walls are her inspired creations.  And in boxes and boxes in storage under the staircase is every drawing she’s ever done since she was a baby.

I throw nothing out. And although there are times where I feel like I should get rid of some of this stuff, I’ll stumble across a drawing she did when she was four and absolutely in love with Peter Pan and it will take me right back to that time of her life where she slept with her Peter Pan doll, watched the Peter Pan movie over and over, and whispered once,

That one drawing brings all those moments back to life for me. That drawing is alive.

I think if it hadn’t been for this column in that long stretch of time where I wasn’t — couldn’t  — get a job writing I might have stopped as well. Completely.

This column kept my fingers moving. Kept my thoughts forming. Kept my words alive. So when I finally did get a job writing I realized I had been writing all along. I never stopped playing my instrument.

My daughter is an enormous fan of Tim Burton. She loves his art. So I took her to his exhibit at the LACMA not too long ago. And there on the walls were yes his famous drawings of Edward Scissorhands, Jack Skeleton, Batman, Alice in Wonderland and Corpse Bride. But it was the torn out scribbles, the scraps of doodles, the playful creations from his childhood that caught my daughter’s attention.

Yes. Once an instrument is found, picked up, and played the only person who can truly put it down is the person playing it.

And like that violinist who didn’t touch his violin for almost 20 years… it’s never too late to pick it up. The moment it is in your hands it comes back to life.

So play! Play for you, play for it, play forever. 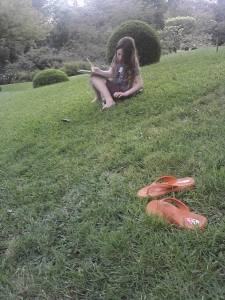