Hello, I’m calling to check on patient 19-3724. I brought him in yesterday and just wanted an update on how he was doing…

I hadn’t stopped thinking about this sweet bird since I met him and dropped him at the Wildlife center two days earlier.  Last week I shared about my unexpected meeting with this  injured bird who I had now named, Flicker. Your response to the column was so loving. I felt all of you rooting for Flicker as much as I was.

Hi, is this Susan?

There was a pause. I instantly knew. The call was not going to be what I had hoped. As she spoke about Flicker’s eye being out of it’s socket and unable to be repaired I started to feel my heart drop. I wasn’t expecting this. I thought this was going to have a wonderful happy ending where I would be told Flicker is doing great and in a month I can come get him and release him where I had found him — in front of my home — and I would share that happy ending with all of you.

But, I’m sorry. That won’t be the case. Our story has a different ending.

She was kind and soft in her tone as she explained that when wildlife animals are unable to to be helped it’s against the law for them to release them back into the world because they are prey. They are unable to fend for themselves. They are destined for a cruel and violent death in the wild.

I’m so sorry, Susan. We had to euthanize him.

The words hit me, knocked the wind out of me. Tears choked in my throat.

You mean you already did it? I can’t come see him to say goodbye?  He’s gone?

She continued to speak and thank me for bringing him and telling me what a good thing I did and a few other nice words that I really didn’t hear because my sadness was too loud.

And THIS is why I never became a veterinarian.

My daughter and fiancé hugged me, told me at least Flicker’s last days were with people who cared about him. That he felt love from me and from the wildlife center and wasn’t left to die in the street. But still… I couldn’t shake the sadness.

I would’ve brought flicker home to live with us in a enormous cage. I was told that too was illegal. And, after all, Flicker wouldn’t have wanted to live in a cage.

I get attached. I get attached hard. But when asked if I wished I hadn’t found Flicker at all the answer is no. Absolutely not. Because we looked in each other’s eyes. I sang Frank Sinatra to him. I named him. And I shared him with all of you. And because of that… Flicker can know he was here. He was seen. He mattered.

And… he was loved. 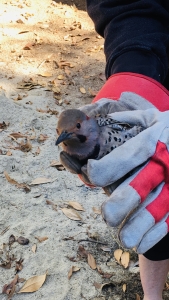