That’s what my daughter feared. From the moment she first put on cat ears my child fell in love with Halloween. So much so that even before the night is over she’s already planning her costume for the following year.

And her costumes are always full of imagination. Dictating wherever she’s at in her own life. From cat to bunny, vampire to ghost on wheelies, Lichtenstein painting to silent movie actress — all hand-made, all requiring make-up and details.

All with stories of who they were and why they looked the way they did.

Trick or treating, knocking on doors, talking about their costumes with the strangers handing out candy, running up lawns and being scared by bats and skeletons that popped outta nowhere. Ending the night with a big bag dump on the floor and the eventual sorting, counting an choosing which candy to eat. This is her Halloween.

I never liked Halloween when I was a child but as a mom it has been one of my favorite holidays. That’s the beauty of having kids… you get to experience childhood all over again… only through different eyes. Their eyes.

So it broke my heart when this Halloween as my  13 year old daughter and her friends set out for their night with me trailing in the distance — not because I had to but because my daughter actually likes me around (I know, right?!), that at one point she came over to me, leaned her head on my shoulder (yep, she’s almost as tall as me now) and said sadly,

Mama, I’m so depressed. I think this might be our last year trick or treating.

That woman asked if we were 18 years old. And one of my friends just said she’s going to go to parties from now on.

It broke my heart to look in her eyes. Eyes that she had painted and drawn to look like a silent movie star.

I didn’t know what to say. I mean, when does it end? Is there a time when a child is too old?

She rejoined her friends and continued on. I watched her go from house to house, thanking each stranger for their candy and complimenting them on their decorations. So kind, so polite. As other kids just ran up and down grabbing their loot and moving on, my daughter has always been one never to take without giving.

I love that kid.

I took pictures. I listened to the giggles when they passed a boy they knew from school, or saw a costume that made them scream. There was fun. A lot of fun. But would it be the last? I wondered for myself as I stood dressed as a dude with a moustache and beard wearing my fiance’s hat.

I hated dressing up as a kid but, once again, when I became a mom I loved it… because she loved it. I loved the smile it put on my child’s face as she saw the witches hat come out or the long cat tail suddenly emerge.

As their feet got tired and every house had been visited we went back to one of her friend’s houses before saying goodbye. Two girls, two moms, one couch. Discussing the night. Our daughters shared their feelings of sadness that it seemed Halloween was different this year. Neither of these two girls ready to give up the elaborate costumes and laughter and visits to homes with pillowcases in hand.

And then the four of us came up with an idea. How about next year we create a Halloween house of our own? With scary decorations, and creepy music and really go all out on making it a haunted house to visit! We can dress up, play roles, hand out candy and later do some trick or treating in the neighborhood if we feel like it.

Their faces lit up, already discussing what they want to be, how they want a graveyard and a cauldron of surprises and dry ice and on and on.

Smiles and hugs and excitement for next Halloween. A new Halloween.

Music played, candy was sorted, laughter and love and pictures.

No, this would not be the last Halloween. Just look at your mom… a woman who abandoned the holiday as a child and picked it up when you were born.

You decide when you’re done, my girl. Only you. xo 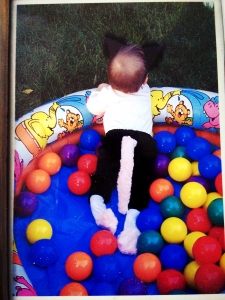