So, it’s my birthday. The day this gal shot into the world.  And, according to my mom, that’s literally how it happened.

A couple of months prior to my arrival my mom took a terrible fall on the icy, snowy steps outside our upper west side Manhattan apartment. The doctor said that my mother could sneeze and go into labor.

A sneeze, a cough, a giggle — who knows — what I do know is that once my mom felt that first contraction I was making my way toward New York City. My father was doing a play on Broadway while his five foot nothing wife was practically giving  birth to me in the cab ride to the hospital.

When she got to the hospital they didn’t even have time to check her in, take off her jewelry (which apparently was mandatory back then) or give her a room. Let’s just say I practically made my entrance on some nurses desk.

I was 6 pounds, a full head of  black hair and big green eyes that already had deep, dark circles under them. Clearly, I was spending those nine months cooking and already worrying about the world.

They were originally going to name me Molly or Polly but landed on Susan. They took me home, put me in a crib, placed me in the arms of my sweet, older sister who hadn’t yet realized that the enemy for years to come had just arrived.

And so, that’s how it went. A year later my folks divorced, my mom, sister and I moved to a house in Los Angeles while my dad stayed in our apartment in New York (the same apartment he still lives in to this day), and life marched on.

My dark hair grew longer, the circles under my eyes got deeper, and my desire to shoot into the world got stronger.

We all arrived here. On some day, in some way, with some story. Life is an amazing thing. And at times it feels long, but more often it feels far too short.

Most days I try and ask myself, did I make today matter? Did I learn something? Teach something? Try something? Give something? I want my life to count. I always have. I want it to be known that I was here long after I’m gone. I used to think that would come from my writing… until I gave birth myself and became a mother.

We are here. All of us. Make it count. Use time wisely. Selflessly. Kindly. Gracefully.

I’m so glad I was born. I would’ve hated to miss out on meeting my child. My own… and my own. 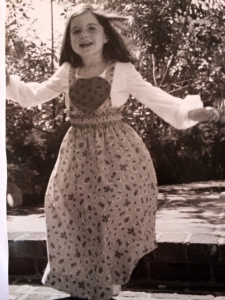