Ten years ago I was taking a hike when I heard the first line of dialogue. For the next month I took that same hike and every day listened for the characters to talk to me… and they did. What came from that? A screenplay based on a friendship with the most important man who ever came into my life. Herman. Yes, the cook who came to live with us.

Ten years later and a roller coaster ride of green lights, red lights, celebrations and devastating disappointments… it is finally getting made. In four weeks we begin our first day of shooting and I still can’t quite believe it. But it’s real. It’s real.

Thank you for believing.

With the incredible Bruce Beresford directing and a dream cast that I can’t yet reveal I sit here trying to be as present as possible for all of it. The photographs of locations, the audition tapes, the note sessions on the script, the discussions of music, costumes… the making of my movie.

A movie that means so much to me. A movie I wrote as a thank you to the man who saw me when I was sure no one else in the world did. A story I always knew I wanted to tell.

But we all do things in hopes that it finds it’s way to the place it’s meant to be. A painting, a song, a performance, a dance… a column.

So when it happens it’s… magic.

This weekend I watched my beautiful boyfriend and his band play at the 9 On Vine club in Hollywood. Play their hearts out. This man who I love has devoted his life to music — accomplished at drums, guitar, bass, piano, songwriting and voice. A man with a dream that began as a boy. I watched as he strut on that stage giving his entire body and soul to the performance. Seeing him in his element. Seeing an audience cheer for more. Seeing him on his journey to the place he’s meant to be.

Don’t stop believing in your reason. It could take ten minutes, ten months or even ten years for something, one single thing, to find it’s way. And when it does you’ll realize the journey was all part of the story.

And… a new journey will begin. 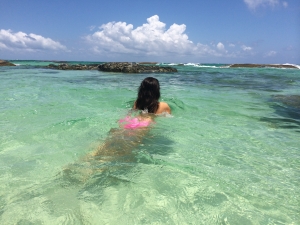